A Storm Too Soon: A Remarkable True Survival Story in 80 Foot Seas 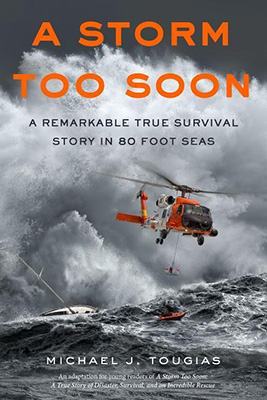 A spellbinding tale of maritime disaster, survival, and an absolutely daring rescue from Michael J. Tougias, the author of The Finest Hours, which is now a major motion picture. When a forty-seven-foot sailboat disappears in the Gulf Stream during a disastrous storm, it leaves behind three weary sailors struggling to stay alive on a life raft in the throes of violent waves eighty feet tall. This middle-grade adaptation of an adult nonfiction book tells the story of the four intrepid Coast Guardsmen who braved the sea and this ruthless storm, hoping to rescue the stranded sailors."The dramatic narrative is engaging and won't disappoint students who enjoy adventure or rescue stories" --School Library Journal