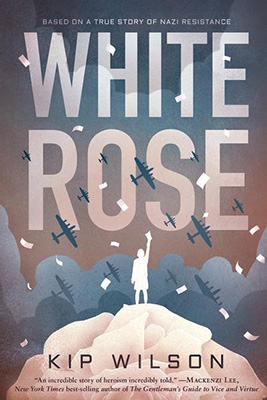 A gorgeous and timely novel-in-verse based on the incredible story of Sophie Scholl, a young German college student who challenged the Nazi regime during World War II as part of The White Rose, a non-violent resistance group. Disillusioned by the propaganda of Nazi Germany, Sophie Scholl, her brother, and his fellow soldiers formed the White Rose, a group that wrote and distributed anonymous letters criticizing the Nazi regime and calling for action from their fellow German citizens. The following year, Sophie and her brother were arrested for treason and interrogated for information about their collaborators. This debut novel recounts the lives of Sophie and her friends and highlights their brave stand against fascism in Nazi Germany. AGES: 12 plus AUTHOR: Kip Wilson is the Poetry Editor of the Young Adult Review Network and has a Ph.D. in German Literature. In 2017, she won the PEN/New England Susan P. Bloom Discovery Award, and her work has appeared in several children's literary magazines. SELLING POINT: Strong female protagonist at a time when that would be highly unusual. Kip paints Sophie as a strong-willed young woman who grows from an impressionable child to a thoughtful adult who believes strongly in her convictions. And, although Sophie engages in romance and friendship, the focus is more on her family and her own becoming as she reacts to the ways the world is changing around her, choosing to affect change rather than watch it happen.