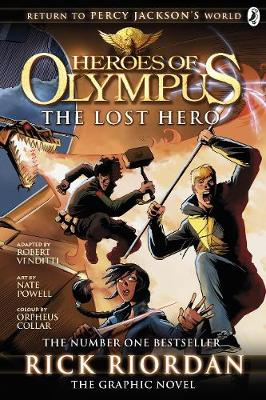 The number one, bestselling title in the spin-off series from Percy Jackson creator, Rick Riordan - now in a stunning graphic novel form! Old enemies awaken as camp half-blood's new arrivals prepare for war. When Jason, Piper and Leo crash land at Camp Half-Blood, they have no idea what to expect. Apparently this is the only safe place for children of the Greek Gods - despite the monsters roaming the woods and demigods practising archery with flaming arrows and explosives. But rumours of a terrible curse - and a missing hero - are flying around camp. It seems Jason, Piper and Leo are the chosen ones to embark on a terrifying new quest, which they must complete by the winter solstice. In just four days time. Can the trio succeed on this deadly mission - and what must they sacrifice in order to survive? Rick Riordan is an award-winning mystery writer. He lives in San Antonio, Texas, with his wife and two sons. Percy Jackson and the Lightning Thief, Rick's first novel featuring the heroic young demigod, was the overall winner of the Red House Children's Book Award in 2006.