Messigraphica: A Graphic Biography of the Genius of Lionel Messi 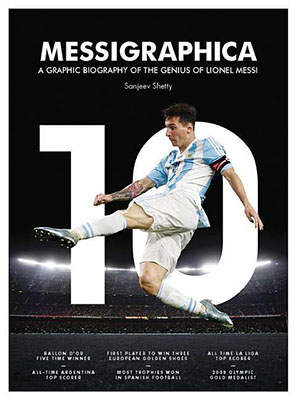 Lionel Messi is universally recognised as one of the greatest footballers of all time. From his childhood days kicking a ball on the streets of Rosario, Argentina, through his rise at the Barcelona academy, Messi has dribbled, dazzled and fired his way into the footballing elite.  In this innovative biography, Messi's genius is explored and celebrated like never before: striking infographics illustrate the brilliance of his performances in football's greatest occasions, illuminate his pitch coverage and ball skills, as well as, his outstanding goal-scoring feats - no man has scored more goals in a calendar year. Messi's talent, athleticism and eye for the game are showcased against his teammates, rivals and footballing legends.  Analysing his years under the tutelage of Pep Guardiola, the overarching shadow of fellow Argentine great Maradona and his rivalry with Cristiano Ronaldo, Sanjeev Shetty charts Messi's rise into a player revered in equal parts for the goals he scores and the ones he creates.  Through infographics, photography and analysis, Messigraphica reveals the genius of Barcelona's greatest like never before.