Showboat: The Life of Kobe Bryant 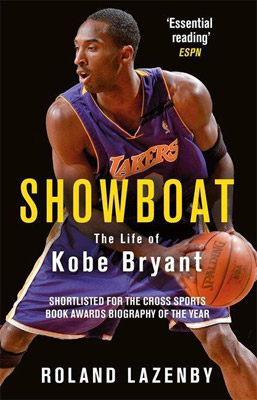 Finalist for the Cross Sports Biography of the Year Award!

"With surgical precision, Roland Lazenby expertly dissects the life of this generation's most fascinating basketball player. What made Kobe Bryant tick so loud for so long? Lazenby shows you with a tour de force in reporting and an intimate inspection at Bryant's trials, accomplishments and tribulations." -- Jonathan Abrams, author of Boys Among Men

"With the publication of Showboat: The Life of Kobe Bryant, it is high time we recognized author Roland Lazenby for what he has become: the finest sports biographer of our time. First with the astonishing Michael Jordan: The Life and now his having written an incredibly researched, beautifully written biography of this enigmatic Laker superstar, Lazenby has entered rarified air: one is wowed by what one learns and at the same time you can't wait to read what comes next." -- Peter Golenbock, author of ten New York Times bestsellers

Eighteen-time All-Star, scorer of 81 points in a game, MVP, and one of the best shooting guards in NBA league history: Kobe Bryant is among basketball's absolute greatest players, a fascinating and complicated character who knew when he was a mere boy that he would be better than Jordan on the court.

The debate over whether that prediction ever came true is a furious one--but Bryant's importance to the sport is undeniable. Third on the NBA career scoring list and owner of five championship rings, he is an undisputed all-time great, one deserving of this deep and definitive biography.

Even within the flashiest franchise in all of sports--the Los Angeles Lakers, where he played his entire career--Bryant has always taken center stage, and his final game captivated the basketball world, indeed the country. Roland Lazenby delves deep to look behind this public image, using classic basketball reporting and dozens of new interviews to reveal the whole picture, from Bryant's childhood through his playing years. Showboat is filled with large personalities and provocative stories, including details of Bryant's complicated personal life and explosive relationships on the court, and is a riveting and essential read for every hoops fan.