From Moa to Dinosaurs: Explore and Discover Ancient New Zealand 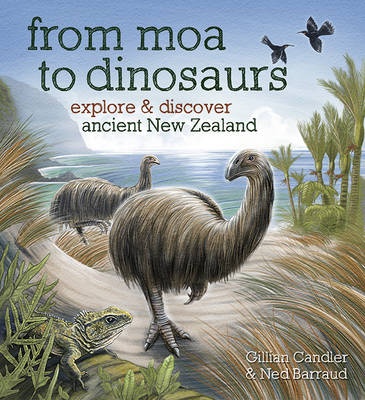 From Moa to Dinosaurs, the fifth title in the acclaimed 'explore & discover' series for children, looks back in time to reveal what lived in ancient New Zealand. The book begins with a glimpse of the animals that lived in New Zealand just before people arrived. It then goes back in time, providing snapshots of particular periods, as far back as 180 million years ago. The range of animals covered in this book is remarkable: moa and other extraordinary birds that are now extinct; crocodilians and turtles; the shark-toothed dolphin and giant penguins; dinosaurs such as sauropods and theropods; as well as those resilient survivors who can still be found in New Zealand today, such as kiwi, native bats, giant weta and tuatara.  Beautifully illustrated and impeccably researched, this is a wonderful and intriguing way for children to learn something about the origins of New Zealand.