As a result of the COVID-19 lockdown we have suspended delivery services inline with the governments requirements. 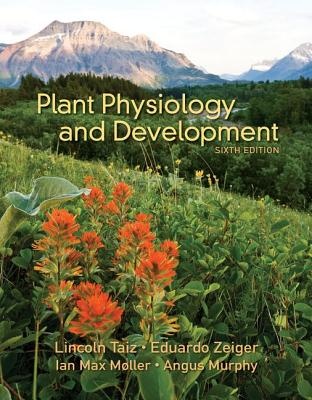 Throughout its twenty-two year history, the authors of Plant Physiology have continually updated the book to incorporate the latest advances in plant biology and implement pedagogical improvements requested by adopters. This has made Plant Physiology the most authoritative, comprehensive, and widely used upper-division plant biology textbook. In the Sixth Edition, the Growth and Development section (Unit III) has been reorganized and expanded to present the complete life cycle of seed plants from germination to senescence. In recognition of this enhancement, the text has been renamed Plant Physiology and Development. As before, Unit III begins with updated chapters on Cell Walls and Signals and Signal Transduction. The latter chapter has been expanded to include a discussion of major signaling molecules, such as calcium ions and plant hormones. A new, unified chapter entitled Signals from Sunlight has replaced the two Fifth-Edition chapters on Phytochrome and Blue Light Responses. This chapter includes phytochrome, as well as the blue and UV light receptors and their signaling pathways, including phototropins, cryptochromes, and UVR8. The subsequent chapters in Unit III are devoted to describing the stages of development from embryogenesis to senescence and the many physiological and environmental factors that regulate them. The result provides students with an improved understanding of the integration of hormones and other signaling agents in developmental regulation. The new organization of Unit III has the added benefit that it minimizes redundancy, making it possible to reduce the number of chapters in the Unit from 13 to 11. Angus Murphy of the University of Maryland has headed up a team of authors and editors to implement the revision. Ian Max M ller has subsequently edited all the book chapters to ensure an even high quality and consistency level. In addition to the organizational changes noted above, two new chapters on stress are included: *A new chapter titled Biotic Interactions--replacing the Fifth-Edition Chapter 13 on Secondary Metabolites and Plant Defense--discusses the integrated signaling responses to a spectrum of biological agents. *A completely rewritten chapter on Abiotic Stress discusses the use of genomics, systems biology, imaging, and bioinformatics tools in the study of abiotic stress. Recent efforts to develop drought-tolerant maize and flood-tolerant rice are described, as well as the role of ABA receptors, newly-identified regulatory networks, epigenetic changes in response to abiotic stress, and rapid systemic signaling. The Sixth Edition of Plant Physiology and Development also includes updated and improved versions of the physiological chapters in Units I and II. A new chapter on Stomatal Biology has been added to Unit II. The chapters on Mineral Nutrition and Assimilation of Inorganic Nutrients feature a new treatment of nitrogen metabolism: *Ammonium and nitrate are often lumped together as inorganic nitrogen although their influences on plants are quite different, almost like two different elements. These two forms of nitrogen are therefore treated separately in the Sixth Edition. *The pathway of all nutrients essential in the human diet begins with plant roots "mining" the soil for mineral elements; the Sixth Edition explicitly examines the linkage between plant nutrition and human health. *The response of plants to rising atmospheric levels of carbon dioxide depends most strongly on their nitrogen status. The Sixth Edition describes the newly discovered mechanism for this dependence and how it will influence food quality in the future. *Exciting new findings on the mechanisms of mycorrhizal associations and symbiotic nitrogen fixation will be added, providing insights about the interdependence of plants and microorganisms.The goal, as always, is to provide the best educational foundation possible for the next generation of plant biologists. RESOURCES For the Student COMPANION WEBSITEThe Plant Physiology and Development Companion Website (available free of charge) includes a rich collection of material that enhances the textbook's coverage on a wide range of topics. Web Topics and Web Essays are referenced throughout the textbook. The site includes the following resources for each chapter of the textbook: *Web Topics: Text, boxes, and illustrations elaborating on selected topics*Web Essays: Discussions of cutting-edge research topics, written by those who do the research*Study Questions*Literature Cited For the Instructor  INSTRUCTOR'S RESOURCE LIBRARYThe Plant Physiology and Development Instructor's Resource Library includes all of the textbook's figures (both art and photographs) and tables in electronic format. All images are provided in both JPEG (high- and low-resolution versions) and ready-to-use PowerPoint presentations. The figures have all been formatted and color-enhanced for optimal projection in the classroom.at